Continuing with our top level focus of improving engagement within the app, we decided to improve the functionality of comments. Allowing users to have a healthy dialogue provides social enjoyment and helps create valuable fan-generated content that all users can enjoy. The more a user enjoys our content, the more likely they’ll return.

Currently, users have the ability to comment on a post. However, these comments are only displayed in chronological order. We start to see dialogue break apart when one user wants to respond to another user’s comment, but there are unrelated comments between them. The conversation becomes hard to follow and is eventually abandoned.

We decided to tackle this issue in two ways: The first is through @mentions. With the ability to reference to whom you are speaking, the user is given a crude way of breaking the linear arrangement of comments; it also allows us to attach notifications to these connections and bring both users back to the conversation. I’ll explain this feature in a later post.

The second feature is the ability to reply directly to a comment and to display those replies chronologically. This functionality is common throughout most social apps, but the level of depth varies depending on how many layers of replies are allowed. For instance, Reddit lets you continuously reply to replies. This creates deep conversations but adds navigational complexity. Looking through Reddit’s threads, we saw the most interaction (upvotes) at the first reply level. So, as a phase one, we chose to allow only one level of replies.

My initial wireframe breaks down how replies are created and displayed:

When displaying replies, we chose to display only the first three replies and allow the user to show more of the thread if they chose. This prevented one thread from overpowering the screen and hiding other comments. It also helped reduce strain on the server since we didn’t need to call all comments at once.

There was conflicting opinion as to which three replies should be shown first. Both options are ordering the replies from oldest to newest. However, Option A would show the three oldest first. This makes sense because the first reply is the most connected to the original comment. After that first reply, the conversation evolves and subsequent replies drift further away. Since our objective is to increase conversation, I believed Option A best helped the user follow the discussion and interact.

Then comes the element of “Freshness.” Are users more interested in how the conversation began or where it is now? Is it important to highlight comments that were just said versus ones that are possibly a day old? Option B highlights fresh replies by showing the three most current. 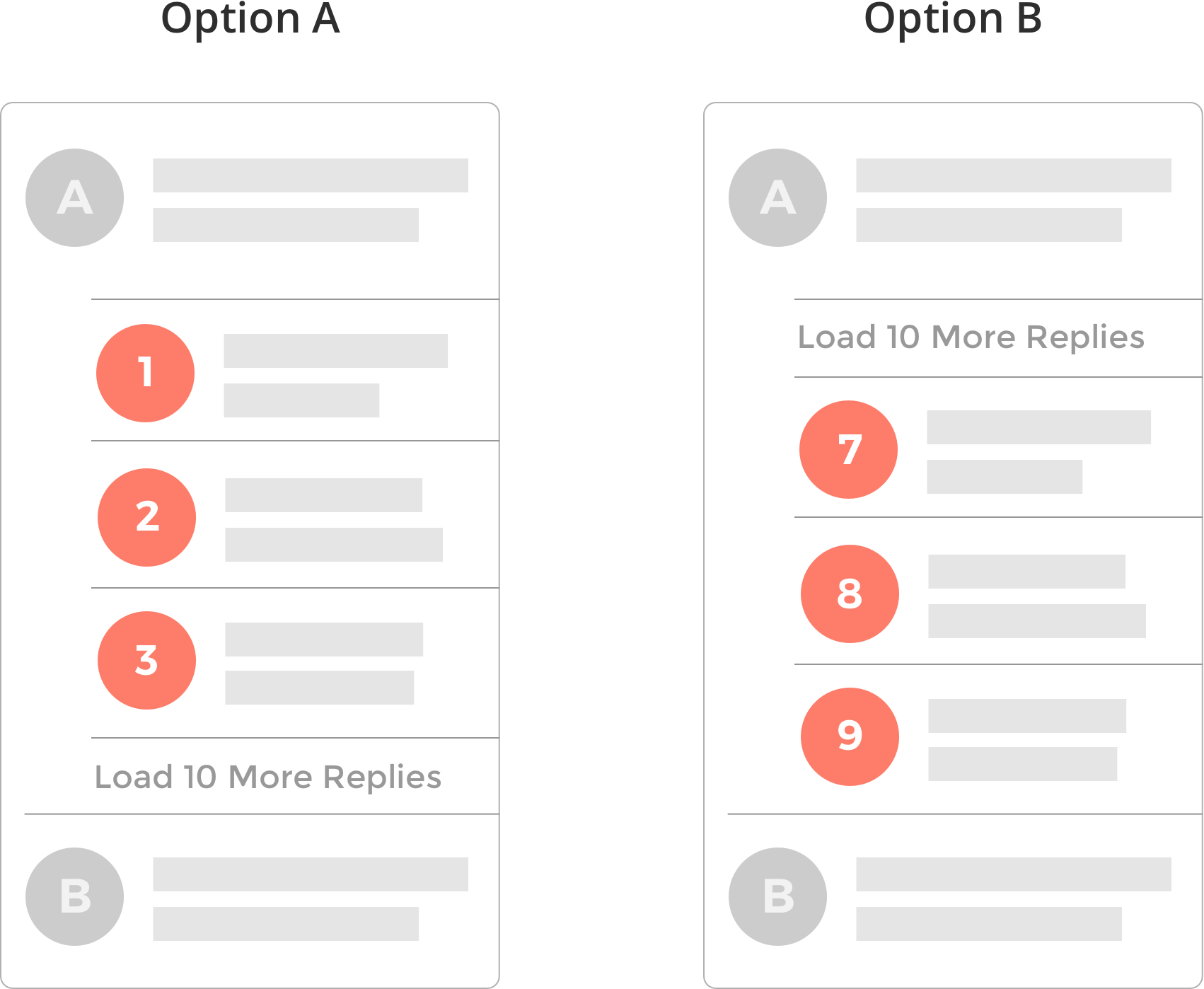 How would I solve this debate? By asking our users. I would quickly mock up a series of clickable Invision prototypes that display the same conversation. Then we could run a usability test to see how users interact with each option and try to see which layout provides the most value. Another method would be to A/B test and see which option generates the most engagement.

For our phase one launch, we’re providing users with a simple to use, easy to navigate method for replying to a comment. This feature provides an additional layer of depth to discussions within the app and helps our high-level focus of increasing engagement. We will continue to monitor the new conversations this feature will allow and continue to tweak as necessary. 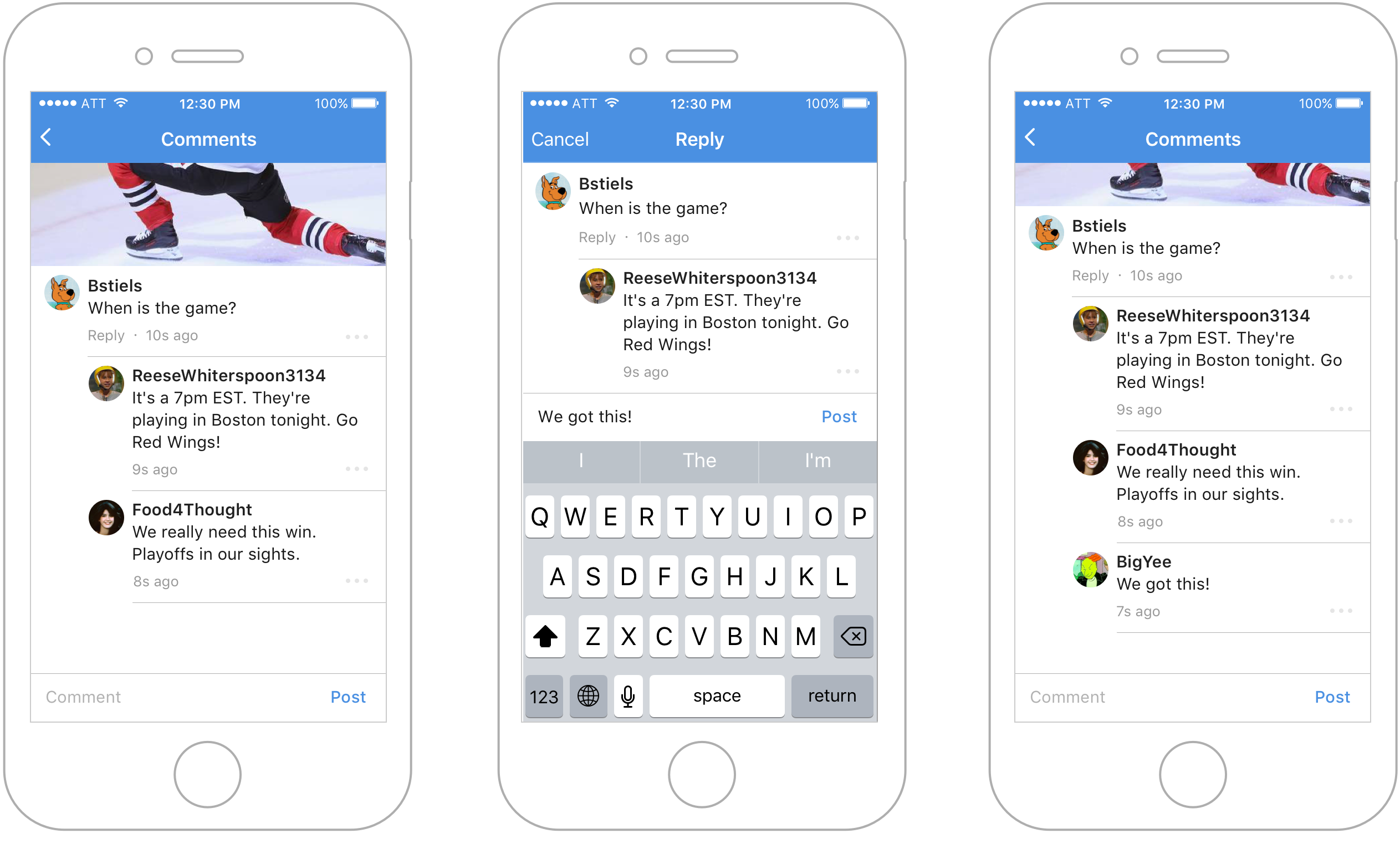 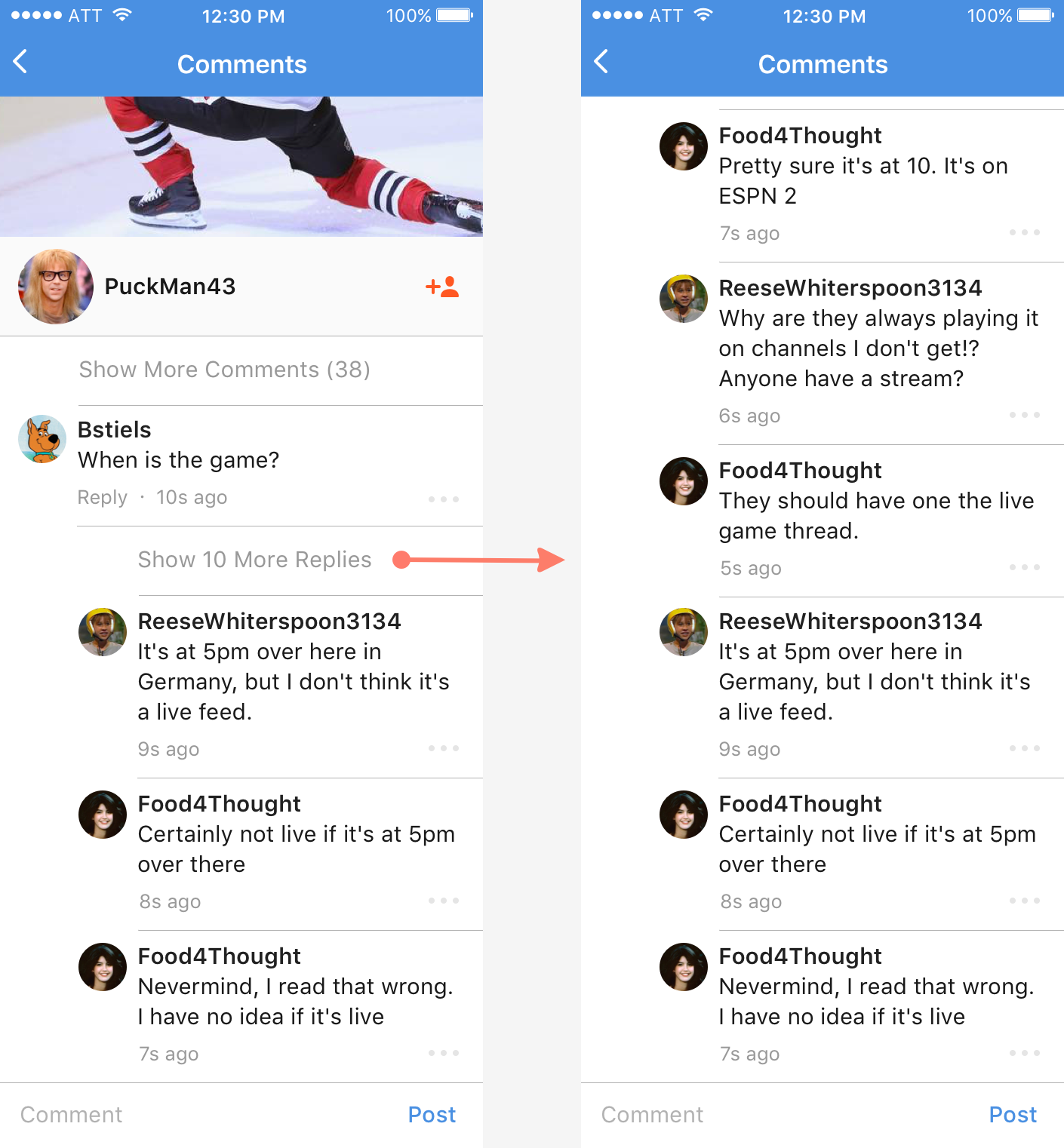